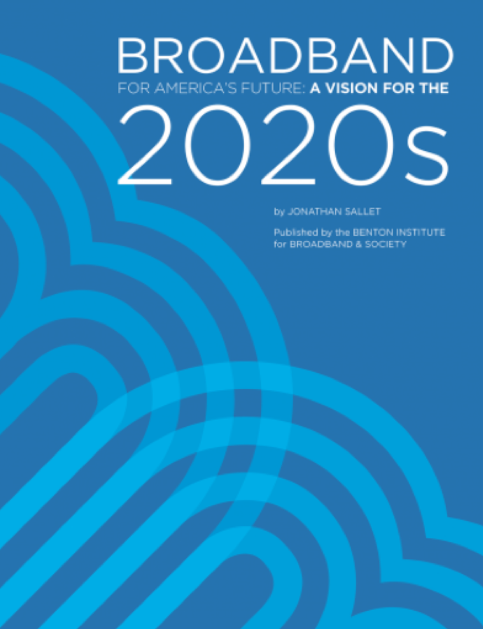 The following is an excerpt from a blog post published by Voqal’s director of telecommunications strategy, Mark Colwell, on the #makingairwaves blog. As the project of Voqal most directly focused on addressing the digital divide, Mobile Citizen is very interested in the solutions for expanding internet access proposed by the report that is the focus of this article.

The newly-renamed Benton Institute for Broadband & Society has released a new report titled Broadband for America’s Future: A Vision for the 2020s. The report, authored by Benton senior fellow, Jonathan Sallet, is a magnum opus of broadband policy for the forthcoming decade.

Jon Sallet, along with Adrienne Farris, recently appeared on the Community Broadband Network’s podcast hosted by Christopher Mitchell to talk about the report.

While there are dozens of important insights offered by the paper, perhaps the most important, are those focused on solutions to connect students who lack broadband access at home. According to estimates, 70% of teachers reportedly assign homework that requires internet access. Yet, according to the FCC’s 2019 Broadband Deployment Report, 39.8% of homes do not subscribe to high-speed broadband. As we’ve discussed in the past, where those numbers overlap is what is referred to as the Homework Gap. According to the Pew Research Center, about 15% of U.S. households with school-aged children find themselves in this gap. Of the 53.6 million households with school-aged children, about 8 million families lack a broadband subscription at home.

The report provides two solutions to help close these gaps. First, Sallet discusses the value of Wi-Fi hotspot programs – like the one Mobile Citizen operates – as a short-term solution to close this gap immediately.

“One short-term answer to the lack of in-home broadband can be found in libraries across the nation that are experimenting with the lending, not just of books, but of Wi-Fi hotspots…Libraries in other cities — including Chicago, Detroit, Seattle, Los Angeles, Boston, Minneapolis, Houston, Kansas City, St. Paul, Tulsa and Bellingham, Washington — also have successful hotspot programs, and libraries in a handful of rural communities in Kansas, Maine, Texas and Oklahoma, among others, are beginning to experiment with the technology.”

The second solution offered by Sallet to close the Homework Gap is to expand E-Rate, the government program that provides discounts for connectivity to schools and libraries, to cover school children at home. The report provides a clear solution:

“There is no reason to wait any longer. Congress and the FCC should expand E-Rate to provide wireless access to students of lower-income families who do not have broadband at home. At current prices, $100 million would support the full cost of LTE service to between two million and three million K-12 students. (Such efforts should be affordable given that the E-Rate program is currently running about $1.3 billion below its $3.9 billion budget cap.)”

To learn more about this report, read the full post on Voqal’s #makingairwaves blog.